To read Winston Churchill’s multi-volume memoirs of the Second World War is, among other things, a study in stubborn denial of reality among British political leaders when Adolph Hitler was on the rise and secretly arming his great war machine in defiance of the provisions of the Treaty of Versailles. With his storied eloquence and persistence Churchill did everything in his power to raise British consciousness to the rising threat until it was too late and Europe was plunged into World War II.

By analogy his political problem back then so reminds me of the spiritual problem we face today in trying to raise the consciousness of this generation to the issue of personal sin and the universal need of salvation through faith in Christ. I think it is safe to say that our generation is about as oblivious to a sin problem as Churchill’s contemporaries were blind to their Hitler problem. The average man-in-the-street is pretty much convinced, except for a few wicked outliers, that we’re all basically good people who should have no reason to fear the indignation of a holy God (that is, if there is any God). I for one can readily understand how Churchill must have felt trying to sound the alarm in deaf ears. 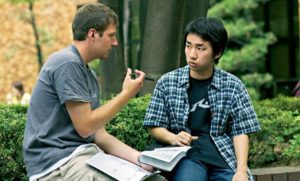 Yet if we are going to draw moderns to Christ and to the foot of the Cross in repentance for sin and to positive faith in Him as the Way, the Truth and the Life (John 14.6), we must quit dodging the issue for fear of offense and just tell the plain truth. This blindness and herculean resistance to the notion that all of us are broken, fallen condemned creatures, hopelessly trapped in a sinful nature and on a headlong rendezvous with the judgment of God must be vigorously challenged if we are to make any headway in evangelism. Yes, it creates backlash like that Churchill experienced in his own relentless battle, but there is an old saying that people must get lost before they can be saved. In other words, mentally people must tremble at the foot of Mt. Sinai before they are ready to bow in contrition at the foot of the Cross. Only those who see in their mind’s eye their condemnation will apply for God’s salvation by grace through faith in Christ. Let’s put it this way: those people who seek to be saved are those who finally understand that the wages of sin is death (Romans 6:23) and further understand they too are on the payroll, “for all have sinned and come short of the glory of God.” This the average Joe or Jolisa today does not get. One evening awhile back my wife caught Bill O’Reilly on Fox News. On his program The Factor, O’Reilly showed an out take of an interview he did earlier with New York radio host, Don Imus. In the course of that interview, according to Olsie, the two of them offered their (ungrounded) opinions about the way of salvation. Both speculated that God would never condemn persons who do good things, an idea recently espoused by Pope Francis (see my earlier blog, “Our Father Who Art in a Fog”) That take is pure and simple street theology, not Scriptural theology.

Right there is the moral fallacy of self-righteous modern man. He assumes that virtuous, honorable, ethical, and moral people actually do exist. And its corollary is that he is among those good folk whom a just God is obliged to exempt from condemnation. These assumptions are as false as Bernie Madoff’s cooked books. Oh, sure, most people I know are civil, decent, generally law-abiding folk who are willing to help out someone obviously in trouble, who try to be nice to those who are nice to them and respect those who respect them. Here and there some even act nobly and inspirationally with selfless courage and sacrificial flare, though these are the exceptions, not the rule by any means. The brief compass of this blog does not allow me to develop that unimpressed view of human nature and its supposedly essential goodness. Suffice it to say for our purposes that the ‘do gooding’ of mankind is superficial, selective, inconsistent, and arbitrary—nothing that rings the bells of Heaven. In short, the best among us (as man measures man by his own standards) simply does not measure up to God’s unbending standard of righteousness and goodness. That sobering reality explodes the whole myth of ‘good people’.

So, our mission here is like that of Winston Churchill when, what was so plain to him about the Nazi regime, Britain was largely blind to. Before he could save England, he knew he had to get countrymen ‘lost’ in effect. Otherwise, they were doomed. So it is with our contemporaries. Until they can see they are lost, they can never be saved. You cannot preach salvation to people who have no fear of destruction. We can tell people all we want about the love of God (and should), but we cannot bypass the fear of God when speaking to a generation that is clueless about what the problem is. How we wake people up is above my pay grade, but I know this: it will never happen so long as we fear upsetting people with guilt trips and refuse to talk about the peril they are in. In his day, Churchill had a simply strategy and eventually it worked—never give up. Tell them and tell them again and again and hope that it will finally sink in. With God’s help that should be our strategy also. Never give up. Tell them again and again and hope by the grace of God the truth finally sinks in. Nobody wanted to hear Churchill drone on and on about the Nazi storm on the horizon. Nobody wants to hear us either. People want to tune us out just as his generation wanted to tune him out. But he never gave up and eventually overcame their denial. People out there today are not buying what we are selling anymore than they were buying what Winston Churchill was selling. They just want us to go away and shut up. To them our message is irrelevant (nothing new there) but ironically it is the culture that is irrelevant because it has lost touch with reality (which more or less defines insanity). So the best way to deal with the impasse is not to shrink from offending people and seek to appease them with happy talk, but keep up the drum beat of the truth until at last, (if God is pleased to open their eyes to their need), the message of salvation through faith in Christ breaks through like the sun after a storm. Never give up!
« Kicking the Habit Great To Be Back! »