What attracts some Christians to the liberal left?  Why would any devout Christian choose to be a fellow traveler with an ideology that throughout modern history (in its various iterations) has consistently shown distaste for, if not hostility to Christianity?

Some of it I may have figured out.

One Good Extreme Deserves Another
In some instances that left-ward drift is possibly over-reaction (i.e. the pendulum effect) to the excesses of the so-called Christian right.  I could see this happening, for I find myself scandalized by some of the same. For instance, the gross institutional narcissism among Protestant mega-churches can make one sick.  Who can abide something posing as evangelical Christianity that seems more about the Big Ego, the Big Show, the Big Event, the Big Splash, the Big Numbers than about the Great Commission? These diseases sometimes go hand-in-hand with those politically super-charged evangelicals who seem to think God is the Great Republican in the Sky who is all about restoring America to its 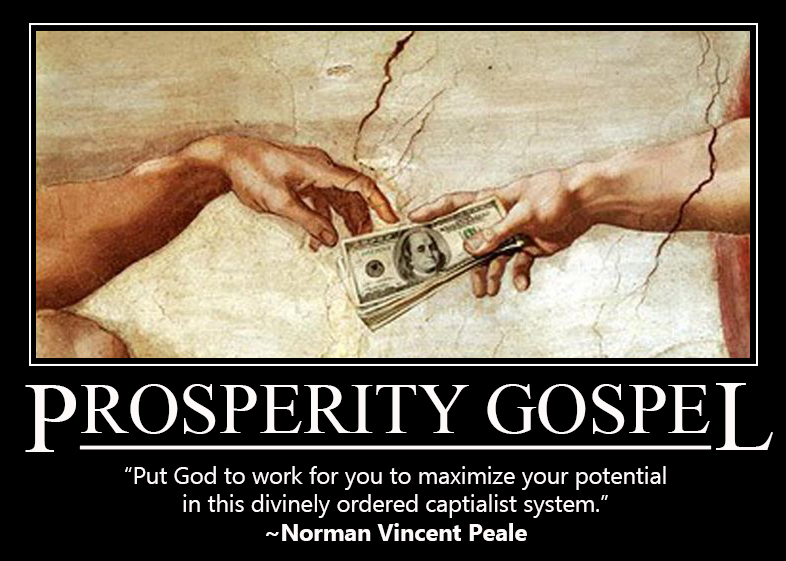 supposedly original Christian foundations (a myth) and who set out in Saul’s armor (i.e. with political weapons) to reverse the drift of the country into secularism and keep Republicans in power.  God bless America! That’s not all.  Out there on the creepy fringes of the Christian right wing is this abominable heresy called Prosperity Theology that runs rampant in Pentecostal ranks.  Jesus calls His followers to take up our cross and follow Him, but these rogue characters call upon believers to pick up their faith and find their cash cow. That ‘theology’ could not be more alien to apostolic (or orthodox) Christianity.

Are these excesses on the right any part of the equation that tilts some Christians left?  I don’t know, but what I do know is that a left turn doesn’t make it right.

“I’m Gonna Be Different…”
In my experience some young(er) people who identify with the left tend to be prideful individualists who dislike being painted with common colors.  In their pathological yearning to differentiate themselves they remind me of clueless sophomores who in seeking to stand out from the hoi polloi, suddenly announce themselves atheists.

With time some of these may eventually be cured by grace and maturity.  Knowing however, as I do, their self-absorbed and insecure mentality all too well, the majority will probably drift farther and farther out to sea from their biblical moorings and shipwreck.

“…Just Like Everybody Else.”
A third incentive for some to turn left is a search for relevance in the Secular City.  It is no secret that the game is on to shut us out of the public square, to mute our voice.  And to a great extent, that campaign has been successful.  The elites and the brokers of public opinion really don’t care for what we have to say simply because they don’t think our message is credible nor do they believe our mission is important. Now for some of us that is no big deal.  No big deal because it is to some degree amusing.  Actually it is the culture that is irrelevant because it is out of touch with reality and that spells a form of social insanity.   If I am in a house of lunatics and they all happen to think anything I might have to say is not worth a hill of beans, I don’t get in a big twist about it, I don’t go into despair over it, I don’t panic if they don’t come around.   It’s their pitiful problem and their harsh consequences to suffer if they insist. Besides, I know that the word and work of God will never be thwarted by an army of puny cultural pretenders.  They don’t decide the outcome.  God does.  He is sovereign.  And the minute He wants to grab the cultural microphone and speak overtop all the secular noise He can do that.  So we just go about doing His business His way and let things work themselves out. With these left wing folk the trouble is, at least as I have discerned it, they operate under no such confidence in the sovereignty of God and secondly, they seem to be the kind who just can’t stand to be uninvited to the world’s party. 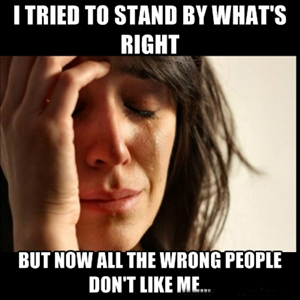 My sense of them is they really love the world and its approval. They aspire to impress the world with their own little ‘war on poverty’ and bandying about phrases like “social justice” that will resonant with those from whom they long for a Good Housekeeping Seal of Approval.  One could just wish they would get over it and sign up for the Great Commission. But here’s the problem for them:  they know they get no ‘points’ from the media, from community leaders, no TV spots, no write ups in the papers doing what Jesus and the apostles did.  But, ah, humanitarian type things the mavens of secular culture can endorse (so long as one doesn’t ruin it with all this ‘missionary’ stuff about Christ.  They want people to just stick with the soup and leave out the salvation).

To the extent that I am correct that this ambition to be embraced by the world drives some to the left, let us remember John’s words (1 John 2:15) that love of the world is a complete contradiction with the love of the Father.  One cannot love both and try to please both.  James (4:4) confirms that: friendship with the world is hostility toward God.   As much as I hesitate to express it this way, we can’t claim that pleasing God is our project on earth while we are ‘suck ups’ to an ideology that has no use for God.

“I Wanna Be Just Like Jesus… Unless You’re Not Into That Sort Of Thing.”
Their problem is not just an aversion to being culturally marginalized, but also, it seems to me, there is also a strong reluctance in these left leaning Christians to endure the stigma of the Cross and the mockery of a contemptuous culture.  There seems to be extreme resistance to being socially ostracized and to accept a status as a new, despised minority.  The Christian left is always trying too hard to advertize to the watching world:

Now, to the extent that perception is on target, that is pure social sycophancy so unworthy of the whole history of suffering saints.  The day we Christians are drawing the applause of the world, we are probably not on the right track.  Who could read Jesus’ words (John 15.18ff) and think that we can find a way to take up our cross and follow Him and have our culture cheering us on?

Here’s the bottom line:  darkness doesn’t approve of light, but hates it.  (John 3.18ff).  How can we ever expect to come up with a way of discharging the Great Commission that attracts to us less lightening than it attracted to Jesus?  If His culture crucified Him, can we expect ours not to want to extinguish our light?

“It’s Not Any of That… We Just Care Too Much To Bother People With the Gospel.”
Finally, some left leaners might respond that their motivation for their stance is less insidious than any of that, but just as straightforward at this: they are just full of Christian compassion for the quandary of the world’s poor and oppressed, a concern, they feel, the rest of us care too little about and do little for. Where that self righteousness explanation applies, it is uninformed. That I briefly addressed in Part 1.  I will not again belabor that point here. But this I will say:  I personally would be less skeptical of the motives of the so-called Christian left if the scope of their outraged sensitivities and their professed compassion for the helpless and downtrodden were not so narrowly confined and crafted to the favorite issues (and whipping boys) of the secular left. Maybe I have missed something, but I have yet to hear a single voice of outrage on the Christian left about the wanton slaughter of unborn children? Why?  Why?  I will tell you: It is because that ‘fight’ would get them on the bad side of the same people whose applause they covet. Furthermore, I have never yet seen these folk getting too invested in helping poor and oppressed and persecuted Christians at home and abroad. Yet in the Scriptures, OT and NT, God’s own lowly people are the big focus of concern.  But so not with these people.  How come?  How come?  Because the left has no compasssion of suffering Christians.  They would just as soon Christians disappeared.

And if these left wing Christians want to take up the cause of those who are discriminated against by the rich and powerful and the just plain hateful, where are they in espousing the cause of the Christian minority who are regularly discriminated against in the workplace, in the public schools, in the universities, etc. with impunity? No shows.  Not a peep of protest. Why?  Why?  Because this minority has no champions on the secular left and the Christian left cannot risk its ire.

I could go on, but I think you can see why I am so skeptical of the motives of the so-called Christian left.  In my opinion, that group is at best just misguided, but I fear in many cases they are just mis-labeled. The left part is beyond question; the ‘Christian’ part may be a misnomer.
« Some Thoughts on Jesus and Social Justice — Part I Words of Wisdom from Across the Pond »