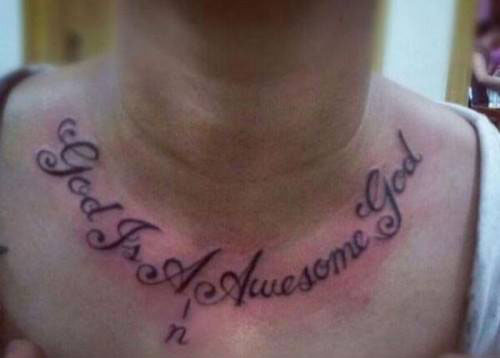 Are tattos appropriate for Christians?

That is a question that keeps popping up from various quarters. Biblically the subject is addressed in only one place—Leviticus 19:28—where through the prophet Moses the Lord commands Israel: “Do not cut your bodies for the dead or put tatoo marks on yourselves. I am the Lord.” (NIV in all cases) This prohibition is part of a Holiness Code forbidding or bidding, as the case may be, various behaviors or practices that dishonor or honor God. Some of the prohibited practices are outlawed because they imitate pagan habits and therefore should be shunned by a holy people who worship a holy God. For instance, the two prohibitions immediately preceding verse 28 have pagan habits in view: “Do not eat any meat with the blood still in it. Do not practice divination or seek omens. Do not cut the hair at the sides of your head or clip off the edges of your beard (pagan style).” (26-27) Then in verse 29: “Do not degrade your daughter by making her a prostitute, or the land will turn to prostitution and be filled with wickedness.” (29)

How Can You Improve Upon God’s Creation?

Scholars are divided as to whether the tattoo prohibition derives from a specific pagan practice in that day and/or out of respect for the dignity of God’s creation (i.e. the human body). In any case, cutting (as in mourning to make suffering worse) or tattooing is viewed as an unnecessary disfigurement of God’s work in creation. And with me that last point really resonates. I absolutely marvel these days at how people can ‘uglify’ themselves. In many cases that self-disfigurement (whether outrageous clothing or hair ‘fashions’) can be rectified when those folk come to their senses. Unfortunately tattoos are rather permanent alterations. Just aesthetically, I cannot tell you how many times I have been aghast at what otherwise attractive people have done to themselves with indelible ink. There is no other way to put it: they look awful, they just look dirty. Why, I ask myself, would any right thinking person ruin themselves that way? Thinking earlier that the forbidding of this practice stemmed from pagan associations at the time and reasoning that today those who go in for so-called ‘body art’ are not doing so for any kind of ‘empowerment’ by or dedication to any pagan deities, I saw no religious issue involved, only an aesthetic one, as I mentioned above. Taking a closer look, however, and studying my scholarly resources, I am now persuaded, as I mentioned, that the Lord’s distaste for this gratuitous disfigurement of the natural body is at least partially owing to a slur on His creative work. That judgment of the matter on my part is not dogmatic, but the evidence I have leans strongly in that direction. That ought to give Christians pause. In all our conduct as believers,, the rule is this: if in doubt, don’t. That principle is embedded in Romans 14:22-23 If we must ask the question, is this right or wrong, there is doubt and that is a ‘Stop’ signal.

Art Is Imitation… So Who Are We Iimitating?

Secondly, any time these fads burst on the scene, before we Christians go along, here is a sound rule I will pass along: Consider the sources. Who is driving it? Who is most going for it? Over recent years I have watched this phenomenon burgeon. Unless my powers of social observation have failed me badly, it seems to me that the vanguard of this cultural craze has been, emotionally speaking, the darker (think inmates) elements, the sicker or more unbalanced people (like cutters) with distressed psyches rippling with self contempt or concealed rage who use so-called ‘body art’ as a sort of anti-social billboard. That shoe will not fit all feet, I know. Once something like this ‘body art’ gets a little traction, then it has a way of mainstreaming and becoming a fashion. That is, until one day, like all fashions in an easy bored society, it is suddenly no longer cool. Only then those who more innocently joined the paint party are stuck with the unflattering ink permanently etched into once attractive members.

Is it glorifying to God?

So those are two cautionary notes for those of us who are called to follow Christ rather than the shifting fashions of the culture: 1) If in doubt, don’t and 2) consider the sources. Scripturally speaking, there is room to doubt whether in God’s eyes tattooing honors our Creator. And the sources that have driven this thing to a popular fashion are too suspect for my pastoral taste, at least. Actually, there is a third biblical principle that comes into play in these decisions (do I or don’t I): whatever you do, do all for the glory of God. (1 Corinthians 10:31) If I were contemplating getting a tattoo, as a follower of Jesus Christ I should ask myself before doing so, do I honestly feel that this ‘body art’ will glorify God? If I can’t justify it in those terms, by no means should I follow through. So, there is some biblical guidance for those you asking and any who might be considering joining the fad train. Some you may wish you had this counsel earlier. Now however the train has already left the station. Well, here’s the good news. What’s done is done. Whatever we have repented of, God in His grace has absolved us of. Bigger, much bigger issues, lay ahead. Bigger fish to fry. Learning from the past, try not to make the same mistakes in the future. God will be pleased.
« So You Have An Anger Problem The Wheels Are Coming Off! Maybe a Good Thing. »